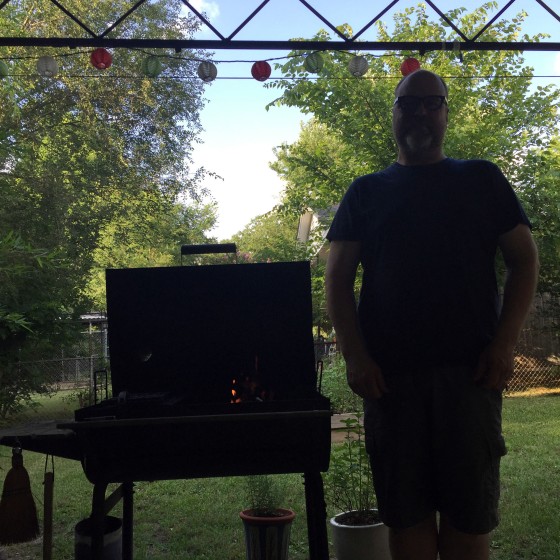 So, I’ve been a lazy cook lately, mainly repeating old favorites or making simple meals but lucky for me, Grant (also known as Big Smokey when he plays guitar!) has been picking up the slack in our household. I feel very fortunate to have a partner who not only enjoys eating with me but also, he can cook! He came up with these two great new meaty recipes. I wanted to post these right away as he incorporated many of the yummy late summer veggies we’ve been getting here in middle Tennessee right now. Enjoy!

Mix all ingredients, except chicken and tomatoes, in a large bowl. Add chicken drumettes, mix, and cover. Set in fridge for about an hour. Preheat oven to 400. Place chicken in a large iron skillet or baking dish. Arrange tomatoes between chicken drumettes, evenly spread out. Place in oven and roast for 25-30 minutes. Turn oven to a high broil for approximately 5-7 minutes, until the tops of the chicken and tomatoes have turned a golden brown. Remove from oven and let cool for 5-10 minutes before serving.

We’ve recently come to love shishito peppers. Many local Nashville restaurants have been featuring them on their menus which caught our attention. In addition to a small plant in our own raised bed garden, our lovely CSA, through Double N Urban Farm, has had a beautiful crop of them this year so we’ve enjoyed quite a few this summer and found so many fun ways to incorporate them into our meals. Below, is one of the most recent ways. 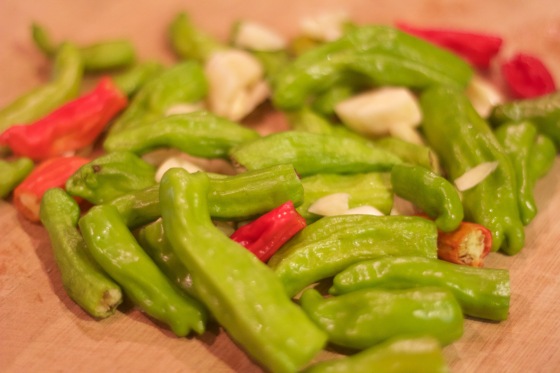 Big Smokey’s Steak with Shishito Peppers
Steak:
Nicely marbled grass-fed New York or Ribeye steak (we got ours from local, Creek Bend Farm)
Rub generously with sea salt, pepper, garlic powder, chili powder. Set aside for 30-45 minutes at room temperature. Prep your grill. (You can cook them indoors, stove top, by using a cast iron skillet on medium high heat if unable to use an outdoor grill.)

Pre-heat roasting pan and add butter, peppers, garlic, and seasonings. Roast for approximately 20 minutes until peppers start to brown. Turn and shake pan occasionally. Do this while steak is grilling. When the steak is done to your liking, pull the steak off the grill to rest. Add cider vinegar and honey to peppers, mix well, and roast for a few more minutes. Slice steak across the grain and arrange on a serving platter. Mix the steak juices with the peppers and sprinkle over sliced steak.

Steak with Shishito Peppers served on a bed of sautéed kale.

Wine Pairing: Serve with a nice Rioja or Argentinian Malbec.

And here’s a salad I came up with to serve alongside the steak.

Mix all ingredients together and toss. Add a pinch of salt and drizzle with vinegar. 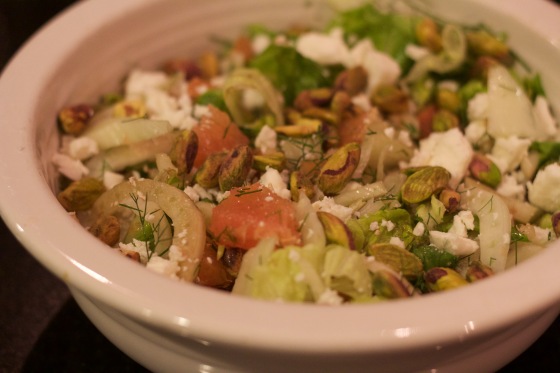 And, since these are mostly Grant’s recipes, I must include a new favorite bluegrass album that has been one of Grant’s favorite albums of the summer- Hot Rize’s 2014 release, “When I’m Free.” Formed in the late 1970’s, Hot Rize got it’s name from the leavening ingredient found in Martha White flour, a common sponsor of the old country shows way back in the day. We were lucky to have the opportunity to see Hot Rize back in July at the Ryman Auditorium for their special Thursday night Bluegrass Jam series. These talented A-list performers (individually and together as a band) put on quite a show.

Be sure to check out this album, if you haven’t. It’s a good one!