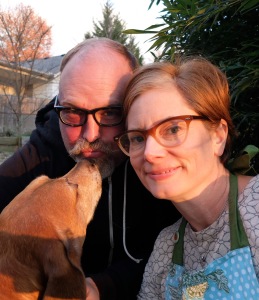 Renewal. That’s the word that keeps popping into my head as I start this new year. 2015 has a nice ring to it, I have to admit. I just successfully made it through another holiday season. Whew… After years of working retail during the holidays and getting caught up in the extra stress often associated, I decided a couple years back that the only way to make it through is to do the very minimum when it comes to celebrating and participating in the festivities. I have worked hard at avoiding all stressful situations during this time. Lucky for us, the real meaning of the season found us anyway. With the new year, we’ve been greeted with so much love from awesome family visits, great times with old dear friends, as well as some fun new friends.

I have felt that the last couple of years have been so difficult for many folks near and dear to us. We lost some dear loved ones and had more friends who were faced with scary health and life challenges. Perhaps it is our age. I have to admit that entering into my 40’s has been more challenging mentally for me than any other decade. The last few months though, I’ve been trying to regroup, alter my perspective on things, reconnect to the people and things that are most important to me, figure out some new paths, get rid of the clutter (literally and metaphorically) and I’m starting to feel a little more comfortable and excited for whatever lies ahead.

One thing that becomes more clear the older I get is the love I feel for family and friends. It becomes easier to let people know how important they are to you. And throughout all these changes and challenges that life offers us as we move through this life, the constants for me that always help keep me grounded and connected to others is good food and music. I feel so grateful that I have always been able to have these two constants in my life.

In keeping our distance with the holidays these past couple of years, Grant and I have used Thanksgiving as a time to try completely new recipes and ways of cooking which has been totally exciting to us. Last year, we had a Korean Thanksgiving and this past Thanksgiving, we did it again but decided to make dumplings! As we have just enjoyed the last two dumplings we had left in the freezer, I thought it was about time to post these recipes. In researching recipes before Thanksgiving, I found this wonderful website by a Korean woman who goes by the name Maangchi. I adore her. She has some great recipes and her videos are really helpful.

I started out by making her recipe for dumpling wrappers and while I did this, Grant was busy working on the dumpling filling.

Combine 2 cups of flour, salt, and water in a large mixing bowl. Mix with a wooden spoon until it turns into a lump. Then knead it by hand for a few minutes until the dough gets a little softer. Put it in a plastic bag to keep it from the air and let it sit for 10 to 30 minutes on the kitchen counter.

Take the dough out of the plastic bag. It will be a little softer and moist and easier to handle. Knead it for 5 to 7 minutes, until it’s smooth and elastic. Place the dough on a cutting board dusted with a bit of flour and divide it into 2 equal pieces. Put one half into the plastic bag to keep it from getting dried out as your work on the other half. Cut the piece of dough into 8 equal sized pieces. Roll each piece out with a rolling pin into 5 ½ to 6 inch round circle disks. They should be a little thinner on the edges than in the middle, because you will eventually be pinching the edges together when making the dumplings, so you don’t want them too thick and doughy. Take the second half out of the bag and make dumpling wrappers out of it using the same method. Use them right away to make dumplings, or freeze them for later. To freeze: Cover a large platter with plastic wrap and put the wrappers on it. Place them so they don’t touch each other, and separate layers of skins with sheets of plastic wrap. When it’s full of skins, cover the entire tray with plastic wrap and freeze it for up to 1 month. To use frozen Mandu-Pi, thaw out at room temperature for 10 to 20 minutes before using them to make dumplings.

And here is the recipe for the Kimchi Dumplings. Our version was slightly adapted from her version which can be found with this awesome youtube instruction class here- https://www.youtube.com/watch?v=fpyEDjmTeGo

Place the beef, pork, garlic, and ginger into a bowl. Use a wooden spoon to mix with 2 teaspoons tamari, 1 tablespoon sugar, 2 teaspoons sesame oil, and ½ teaspoon ground black pepper. You can use a food processor if you want to. Heat up a skillet over medium high heat and add 1 teaspoon grapeseed oil. Stir fry the meat mixture until the meat is no longer pink. Transfer to a large mixing bowl and be sure to include the juices from the cooked meat. Add the minced onion, the green onions, and kimchi to the mixing bowl. Squeeze the tofu slightly by hand to remove excess water and add it to the mixing bowl. Add 1 teaspoon salt, 1 teaspoon sesame oil, ½ teaspoon ground black pepper. Mix well by hand or a wooden spoon until well mixed. Put a wrapper on your palm and add 2 or 3 spoons of filling to the center. Loosely fold it in half vertically. Pinch the bottom on the fold to seal it. Push the right side in a little bit, so the wrapper folds in on itself slightly. Pinch that fold to make a pleat. Do the same on the left side and alternate sides all the way up until the dumpling is sealed. Pinch or wrap the end to seal it. Repeat until you’ve made all dumplings.

To freeze for later use (up to 3 months):
Set the dumplings on a tray lined with plastic wrap so they aren’t touching each other. Put into the freezer for 8 hours or so, until they are all frozen. Gently put them into a plastic bag or airtight container and put them back into the freezer.

To steam dumplings:
Boil water in a steamer. Line the steamer rack or basket with a parchment paper. Place dumplings in the steamer basket, but be sure to make room between them because they will expand slightly when cooked. Cover and steam for 15 minutes. Remove and serve with dipping sauce.

To fry dumplings:
Heat up a skillet over medium high heat. Add 2 tablespoons vegetable oil and swirl to spread the oil evenly. Add some dumplings and cook over medium heat, rotating them so each side gets golden-brown. Lower the heat to low and cover. Cook for a few more minutes. Remove and serve with dipping sauce.

In making the mashed potatoes, Grant saved the skins and, not wanting to ever waste any food (plus, always looking for more delicious snacks), he lightly fried the skins for a little pre-meal appetizer! Genius idea. 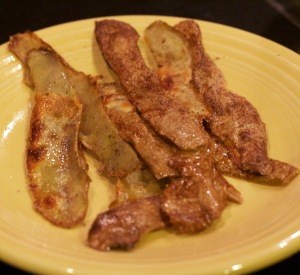 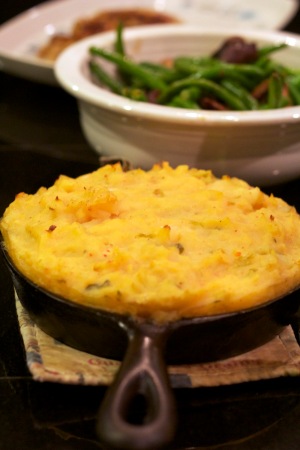 We made a few fried dumplings and a few steamed. I think the steamed ones were my favorite! We served the dumplings with green beans that had been sauteed with shiitake mushrooms and some kimchi mashed potatoes! As an appetizer (it was Thanksgiving after all), Grant made these yummy chicken wings that he threw together. We enjoyed these with some delicious homemade cider our friend David made for us.

Preheat oven to 400. Combine all ingredients (excluding the chicken & grapeseed oil) together in a bowl. Add chicken and cover. Marinate 2 hours or overnight. Heat an iron skillet on stove on medium high. Add grapeseed oil. Take chicken out of marinade but reserve the marinade. Put the chicken wings in the pan skin side down and sear until a golden brown. Flip chicken wings over with tongs or a fork. Place skillet in the oven for 20 minutes to finish cooking. While those are cooking, heat the marinade in a saucepan over medium heat to reduce by half. Use this to baste the chicken wings a couple of times for the last 10 minutes of baking time. Remove the skillet from the oven and cool for a couple minutes. Serve!

And for dessert, I made these cookies which I adapted from another shortbread recipe I came up with awhile back. 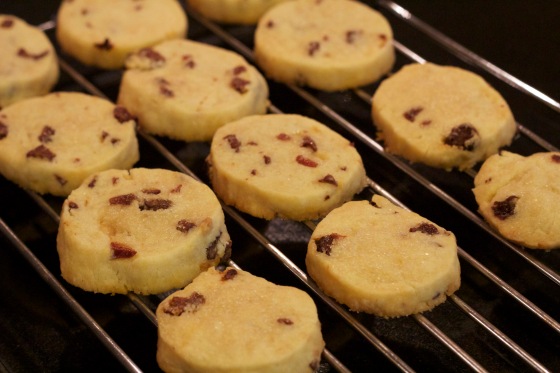 Preheat oven to 325°F. Mix sugar, salt, and flour together in a bowl. Add butter. Use your finger to incorporate the butter into the flour mixture, slowly and gently like you would pie crust. The largest pieces of butter should be the size of grains of rice. Once the butter is mixed in, add raisins, ginger, and buttermilk. Mix together. Gather dough into ball, wrap in plastic and refrigerate for an hour or so. You can roll dough out and cut cookies with a cookie cutter or roll into a log and slice. Sprinkle each cookie with a little raw cane sugar. Bake cookies until lightly browned, about 20 minutes. Cool on rack.

We’ve been enjoying some fun Happy Hour shows around town and our usual weekly musical events and sincerely hope to follow through on my resolution of more live music in 2015 in the weeks to come… Happy New Year everyone!