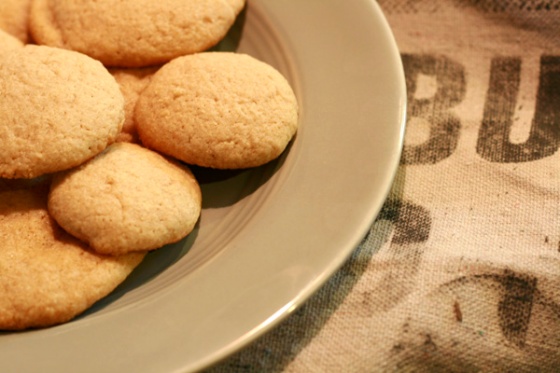 We don’t actually eat many sweets but I love making desserts, especially for guests. My Momma brought me up right! However, unlike my Mom, I tend to gravitate towards desserts that aren’t too sugary. I often use less sugar than a recipe calls for (to which Grant always reminds me, “We are in the South now, people like things sweeter!”), use alternate natural sweeteners, or just select recipes that are naturally less sweet. These recent dessert recipes struck a chord with me. 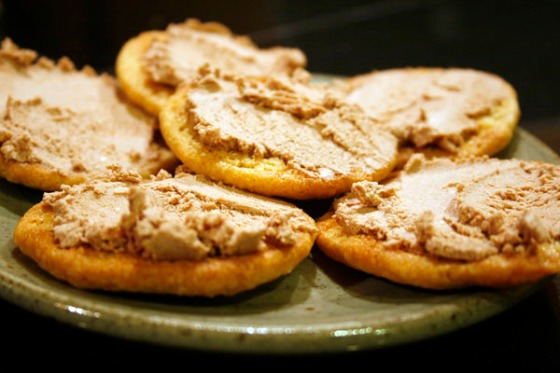 I took that Vanilla Wafer recipe (I altered it a little so am posting here again) and first paired it with some fresh chevre from Noble Springs Dairy. This was a special flavor, chocolate, that they don’t always have but you could easily make up some of your own, I would think, starting with a plain chevre. These would also be delicious with their Apricot Honey Chevre!

Preheat oven to 350. With a mixer, mix sugar and butter together until creamy. Add egg and vanilla and mix. Add the flour, salt, and baking powder. Mix. Refrigerate for about half an hour. Roll dough out to ¼” on a well floured board or pastry cloth. Cut with a small cookie cutter. (Or you can form dough in a log and slice.) Bake in a 350 degree oven for about 12 minutes. Let cool on the cookie sheet and they will crisp up.

My Dad and Stepmom were recently visiting and I used these same vanilla wafers to make Banana Pudding. I used little ramekins and tiny jars to make individual servings.

I found this Vanilla Pudding recipe to work well. I combined a Real Simple recipe with a Martha Stewart recipe and came up with this…

Whisk together sugar, flour, and salt in a saucepan. Scrape the vanilla seeds from the pod and add both the seeds and the pod to the pan. Pour ¼ cup of the milk in and whisk it together to form a smooth paste. Whisk in the remaining milk and the yolks. Cook over low heat, stirring with a wooden spoon until it starts to thicken, about 15 minutes. DO not allow it to boil. Remove the pan from heat and stir in the butter. Pour into a bowl or, if making individual Banana Puddings as I did, have tiny jars or ramekins laid out. Place a vanilla wafer in the bottom of each and then place about 5 slices of banana on top of the cookie. Pour pudding over and then top with another cookie or cookie crumbs and cover with wrap. Let cool and then refrigerate for at least one hour.

Inspired by my friend (and pastry chef at City House) Rebekah’s amazing homemade cookies, in particular here- her graham crackers, I decided to try to make my own. I looked at many recipes online and adapted this one from Smitten Kitchen (which she had adapted from a couple other sources). Mine went like this…

For the topping, mix together:
2 Tbsp Cane Sugar
1 tsp Cinnamon

Mix the flour together with the sugar, baking soda, and salt in a big bowl. In a separate small bowl, mix the honey with the molasses, milk, and vanilla using a whisk. Add the butter to the flour mixture. I just used my hands to gently crumble the butter while mixing it with the flour, as I do for making pie dough. Then once the butter is incorporated and not larger than rice grains, I poured the honey mixture in and combined. Divide the dough into two portions and pat into a rectangle about 1” thick and wrap it up. Chill for an hour or two. Flour a dough board or pastry cloth. Roll the chilled dough out to ⅛” thickness. Trim the edges to form a straight edge on all sides. Cut into desired sizes. Sprinkle tops with cinnamon sugar and place crackers on a parchment lined cookie sheet. Bake at 350 for 12-15 minutes.

Of course, the thought of graham crackers always brings to mind homemade S’mores so I searched for a more natural recipe for marshmallow cream and found one from Bon Appetit that sounded promising. I added a some cacao powder to include the chocolate element and made these little S’more Sandwich Grahams! 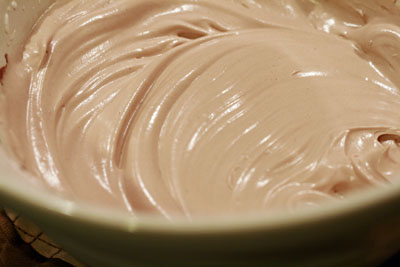 Combine ½ cup sugar with ¼ cup water in a small saucepan over medium heat. Add the cacao. Occasionally swirl pan and brush down the sides with a wet pastry brush. Using a candy thermometer, simmer until thermometer reads 240. Place egg whites, salt, and vanilla in a bowl and mix on high until frothy. Slowly add the remaining ¼ cup sugar. Whip until peaks form and then pour the hot syrup into the meringue in a slow, steady stream while whipping. Increase mixer speed to high and continue whipping until stiff peaks form. Reduce speed to medium and whip until meringue is cool. Use this to sandwich between two homemade graham crackers! YUM! 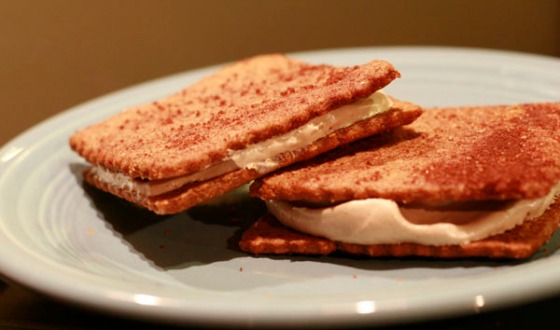 I can only imagine that these homemade grahams would also make an amazing crust for your favorite Key Lime Pie recipe. I have never made a Key Lime Pie- mostly because I never need to. Our friend and Red Barn Round-Up cohort, Allison, makes the best! She very kindly agreed to share her recipe here. 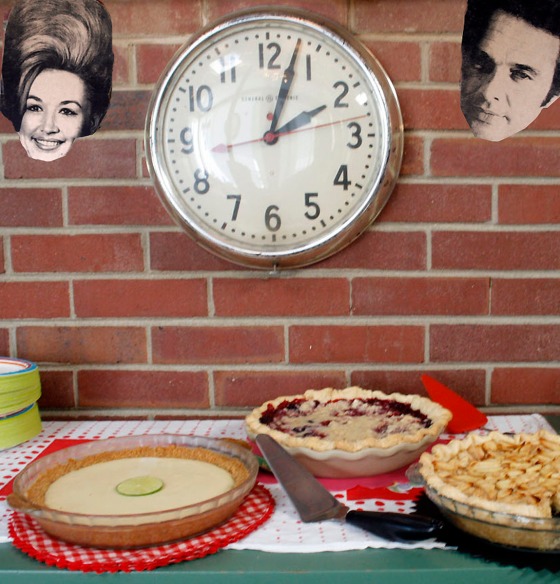 Allison’s Key Lime Pie is a regular to our Red Barn Round-Up parties, as pictured on far left.

Allison’s Key Lime Pie
Allison originally got her recipe from the bottle of the Nellie and Joe’s Key Lime Juice! The trick, though, is a good crust. They say graham cracker, but she makes hers out of crushed gingersnaps. She says a mix of half graham cracker crumbs and half gingersnap crumbs works well, also.

Combine milk, egg yolks and lime juice. Blend until smooth. Pour filling into pie crust and bake at 350º for 15 minutes. Allow to stand 10 minutes before refrigerating.

By the way, did you know that Derek Hoke’s favorite pie is Key Lime Pie? It is. 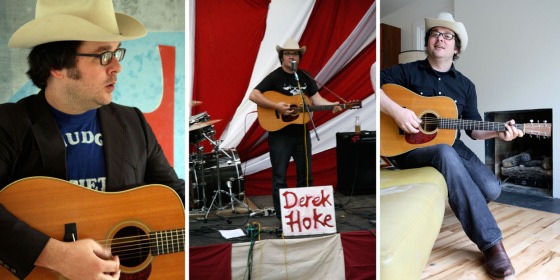 Grant’s been playing with Derek Hoke for a couple years now. It was actually Allison who first introduced us to Derek’s music, specifically, his first album, Goodbye Rock N Roll. (I love that album.) Grant started playing for him shortly thereafter. 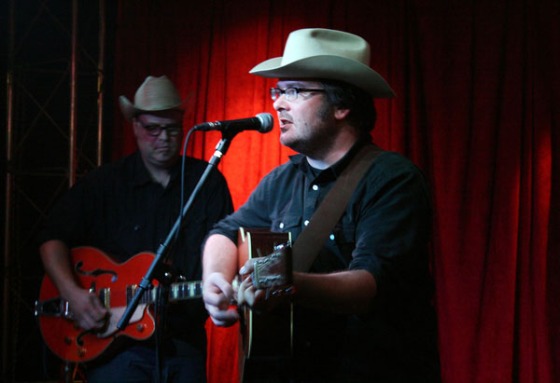 And speaking of Derek Hoke, last week was Derek Hoke week in our neighborhood. His brand new, very anticipated album, Waiting All Night, was just released. This follow up album, produced by Dexter Green, features eleven new Hoke songs and world-class musicians. It is pretty awesome. Last Monday he was interviewed on my favorite radio station, WSM, where he and the band played a couple songs and talked with Bill & Charlie (my fav!). Then on Tuesday, he had his album release party at the celebrated 5 Spot and played to a packed house.

He even has new merch! That’s right. You heard me! Hurry up before it sells out! Then on Sunday, he and the band (who were dubbed “The Hoke Ridge Boys” for last week) did an in-store at The Groove record store. Allison and I provided treats (cookies and biscuits and pies, oh my!) and dj Tim Hibbs played some of the best music ever heard from a vintage 45! All in all, it was a good week for Derek Hoke, but it doesn’t stop here… get a copy of the new album now and watch the new video here (featuring a special guest appearance by our friend Rose!).

Listen out for interviews (NPR y’all!) and upcoming shows. And, there’s always $2 Tuesdays at the 5 Spot… always Derek Hoke, always fun, always $2. See you there!