A few weeks ago, I was in the mood to invent a new classic sandwich. Big task. Grant had a big gig schedule one weekend day- a show down on lower Broadway from 4:00-8:00pm and then had to drive straight up to Kentucky to play another 4 hour show an hour later. I thought it would be easier on him (and kind of fun for me) if I picked him up and had sandwiches packed. I came up with this plan in my head and had days to figure out what to make. It was fun. I wanted a fall/winter sandwich with some meat but that also had lots of veggies. Like a one-pot wonder meal but in the form of a sandwich.

Grant named my new creation, The Lady Smokey Supreme! It went like this… 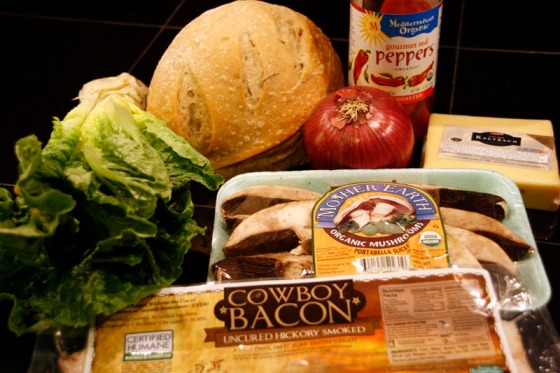 Heat oven to 375. Place mushroom and onion slices in a baking dish that has been rubbed with olive oil. Sprinkle with a little more olive oil, balsamic vinegar, salt and pepper. Bake in the oven for about half an hour. Meanwhile, cook bacon in an iron skillet. Once done, drain on paper towels. Slice bread and cheese and place cheese on two of the pieces. Once the mushrooms and onions are done, remove from oven and place bread on a baking sheet to toast. Once toasted and cheese melted, remove from oven. Layer the bacon, mushrooms, onions, red pepper, and lettuce. Enjoy! 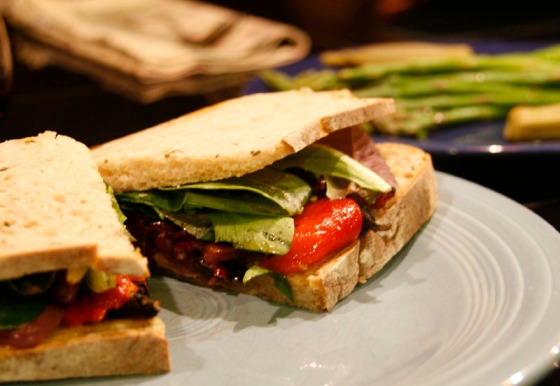 Steamed asparagus with a sprinkle of lemon & homemade pickled okra from the garden make perfect accompaniments to any sandwich!

Also, I was asked to teach a gourmet club how to make pie! I took my friend Catherine with me and we had so much fun. She took some great photos. I thought this would be a good place to post them. I am in desperate need of some new pie recipes. New ideas and experiments soon to follow.