Bray was here last week and we had such a great visit. You can see and read all about her Southern gastronomic finds on her blog. Give her a week or so, though, as she’s still traveling but in the meantime, you can read all about her Seattle and Portland finds. She has a beautiful site. Luckily she has been to Nashville several times before because it was the weekend of July 4th. Holidays in Nashville are a little sleepy compared to all the other days of the year. We did manage to hear Grant play with Jon Byrd one day and get in some 4th of July honky-tonkin’. Plus, we went kayaking on the Duck River and we made her a traditional all-American meal of… Fish Tacos!!! Heehee. 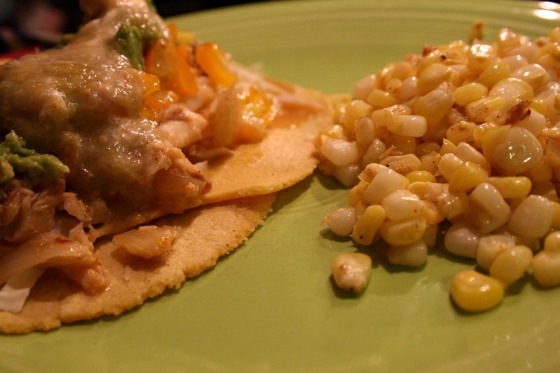 We finally found a good non-genetically modified corn masa made from Bob’s Red Mill and it makes delicious fresh corn tortillas! Grant made the best talapia and sauteed onion filling which we topped with avocados, salsa, cabbage, and creme fraiche.

I’ve been listening to Welder, the new cd from the lovely, talented and hysterically funny Elizabeth Cook. I loved her last album, Balls, but this one is even better, in my opinion. She is a super smart, funny and a genuinely warm-hearted Southerner and this new album shows all those sides of her personality in rare form. She’s doing it all her own way which I love and admire. Quick, go buy her new cd NOW! You can thank me later.

SO, I have a produce addiction. I can’t stop buying fresh local produce. I walk past it and have to buy it. I LOVE SUMMER for this very reason- everything tastes so good. You hardly have to even cook at all- you just eat it raw or mix a couple fruits or veggies together and voila, dinner is served! I realized that with all I had picked up at the Farmer’s Market, The Turnip Truck, and then what has finally started to ripen in our own little garden, we had a surplus so my brain went into overdrive and I came up with some new recipes. Here is what we’ve been eating…

I have been totally inspired by tomatoes! I forgot how good tomatoes are until I moved back to the south a few years back. You’ve never fully tasted how good a tomato can be until you’ve had a southern tomato. We also have a prolific amount of basil in our garden right now so the other day, noticing we had some salad greens that needed to be eaten and also some chicken breasts, I made a yummy tomato basil dressing by sauteing some chopped tomatoes and garlic and then adding in a little brown sugar, salt, pepper, apple cider vinegar, and extra virgin olive oil.

I then made a batter to dunk the chicken into (I should have soaked it for a couple hours but didn’t plan ahead) consisting of buttermilk, an egg, and some hot sauce. I made a flour mixture of White Lily flour, thyme from the garden, paprika, salt and pepper. I dunked the chicken in the egg batter and then in the flour mixture and fried it in some grape seed oil on med high heat.

Finally, I topped the salad with fried chicken and homemade tomato basil dressing! Delicious! The leftover dressing made a great marinade and cooking base for shrimp the next day.

And then I was trying to figure out a great way to eat all this summer squash we’ve acquired. Here’s my newest risotto creation- Southern Summer Risotto! I first roasted some cut tomatoes and garlic in the oven at 400 degrees for about 20-30 minutes. I then pureed that with some vegetable stock, adding a teaspoon of sugar and some salt and fresh ground pepper. I used this for my stock needed for making the risotto. Next I sauteed a Vidalia onion that I had cut into half rings and all of my summer squash that I had cut in rounds.

Then I started making my risotto in a separate pan. Once the risotto was just about done, I mixed in some shredded Parmesan Reggiano and then poured the risotto into a bowl with the squash and onions. I stirred it gently and then added fresh chopped basil. The essence of summer in the South all mixed up in the form of a risotto! I thought it was brilliant. We enjoyed it with some sauteed shrimp that had been marinating in the leftover tomato basil dressing I made the night before. This turned out to be a beautiful tomato infused dinner. 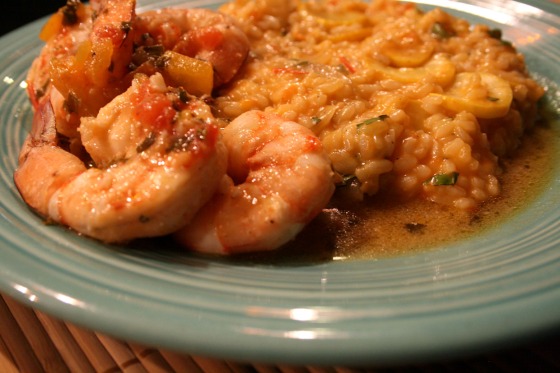 I will close with another new cd recommendation and the title of this post, Tennessee Stomp by Hillbilly Casino! These guys are some of the nicest, most talented, most energetic, and hard working musicians in Nashville who are also doing it all their way. Their new cd is really fun and although it has leanings towards rock-a-billy, it is much more layered and less genre-oriented than that. One of my favorite songs is a song about John Rich getting his comeuppance down on Broadway. This song features backing vocals from Dale Watson. You’re going to want to own a copy of this cd, too, so go buy it now! We went to their cd release party last night at FooBar in which Nashville’s latest genre crossover craze, Country Metal, made its debut with the band Motorhome! They are awesome. OK, I am a little biased as Grant provides the Country element of the band. You probably need to check them out for yourself.

And, to end on a sweet culinary note… We usually are treated to homemade cinnamon roll goodness only once a year as my Mom traditionally blesses us all with her amazing rolls. These are a treat and as we’ve gotten older, we look forward to these just as we did presents as kids. Well, we truly got Christmas in July this weekend when our friend Geoff Firebaugh from Hillbilly Casino invited us over for some of his wife, Mel’s cinnamon rolls. They were vegan with a coffee icing on top. He had talked them up so much that Grant and I both feared they couldn’t possibly live up to the anticipation but they exceeded our expectations and were fabulous! Thank you Mel!

And what’s better than ending on a sweet note? How about two sweet notes, kind of like second dessert! I have a cookbook that my Mom made for me comprised of all of her recipes and our family recipes. This book is one of those things I would grab if there was an emergency and I only had time to grab a few personal belongings. It is that special. One of the recipes in it is my Granddaddy’s second wife’s (we called her Mother Margaret) recipe for Apple Pie. It is a custard type pie. I make it often and it has become one of our favorites which is odd because it is the only good thing Mother Margaret ever cooked. She was known for her lime green jello salads and her version of Hamburger Helper which we referred to, lovingly and never to her face, as Opossum Helper because she cooked it so long the pasta began to break down. Anyway, this pie is good! With all the berries in season, however, I had no desire to make an apple pie so one day, in the shower, it hit me- what if I made a strawberry custard pie?! So, I tried it. It was pretty good- especially for not looking at any pre-existing recipes beforehand. I think I can come up with a better one maybe but for now, we are enjoying this one. Recipe is as follows.

See recipe for pie dough from May post. Please don’t use a store-bought crust. Mix sugar and flour together and then add melted butter and eggs. Add cinnamon and vanilla and then stir in strawberries. Pour into unbaked pie crust. Bake at 425 for 15 minutes. Reduce oven heat to 350 and bake for 30-35 minutes.